All is not always as it first appears. 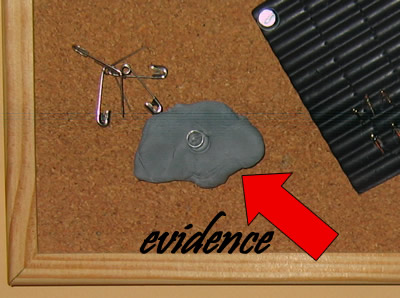 This, my friends, is evidence of my psychotic, Blue-tac-stealing past.

As you can see, exhibit A. clearly shows a WAD OF BLU-TACK, proof that as a small child in primary school (Elementary school) I was a crazy,deluded Blu-tack thief.

Each day, I would go to school to steal Blu-tack bit by bit over the year, and to think about the precious Blu-tack that teachers threw away without really knowing of the true beauty of Blu-tack.

I am sad to say that though my Blu-tack stealing days were great, my collection is not what it used to be.

Most people might find this strange, but I think that it was just because Blu-tack is amazing. I just remembered my crazy Blu-tack stealing days, and they will be times I will cherish forever. I hope you will always cherish your childhood memories, no matter how strange they are.

And all of this from your friend or family member G-man, whom everyone in Oklahoma seemed to think was such a nice, polite teenager. Boy, did I have you fooled.